Christmas At The Palace (formerly published as A Royal Wedding) 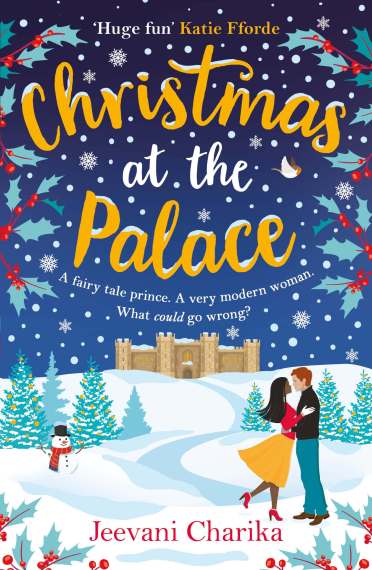 Campaigner, feminist, doctor, humanitarian – all words that Kumari would use to describe herself.Potential princess? Not even in her vocabulary.

But when Kumari’s charity work catapults her into the limelight and brings her to the attention of Prince Benedict – playboy prince and sixth in line to the British throne – all bets are off.

Royal party boy, charming rogue, England’s most eligible bachelor – Prince Benedict is all those things. Or at least he was. These days he’s taking life more seriously, following in his mother’s footsteps and focusing on charitable causes.

When he meets Kumari the attraction between them is instant. But, according to the press, Prince Benedict might just have found the most unsuitable bride.

Will love win the day?

If like us you can’t wait to celebrate the upcoming royal wedding, we think you’ll love this gorgeous modern fairytale.

Buy Christmas At The Palace now!

“Written with a sure touch, and Jeevani’s characters leap from the page. I love Jeevani Charika’s writing!” Sue Moorcroft

“What a fantastic and fascinating read. A refreshingly different and thought-provoking romance.” Phillipa Ashley

“It’s a beautifully written fairytale romance where a Prince meets an ordinary doctor from Leeds, a daughter of Sri Lankan immigrants, and falls in love, but it’s so much more than that.” 5 stars – Review on Goodreads

“The perfect book to curl up on the sofa with!”  5 stars – Amazon review

An incredibly charming read that I managed to consume in a few sittings Source: Drinking Books

A light-hearted and magical read that leaves the reader feeling all warm and fuzzy inside Source: Always Need More Books

I thoroughly enjoyed this enticing and charming book. Jeevani Charika has such an appealing and flowing style of writing that makes the words dance off the pages! Source: Jera’s Jamboree

I definitely recommend this book, even if you’re not normally a fan of contemporary romance. There’s a lot of depth and heart in this book that I think makes it stand out from the crowd. I enjoyed it a lot! Source: A Cat, A Book and a Cup Of Tea

With its engaging characters, fast-paced action as Benedict and Kumari embark on their whirlwind romance and its tantalising glimpse of what it really is like to be a member of the British royal family, Christmas at the Palace is a thoroughly engaging read Source: My Weekly

Safe to say I adored this book. It’s so sweet and cute whilst still managing to promote a brilliant message Source: A Novel Idea

“I could not put this book down once I had started.” Amazon review

“I was blown away. Such strong characters, and such a marvellously weaved story. It’s unpredictable, real, deep, and relatable.” Madhuka on Amazon

“There’s a brown woman on a royal romance cover!!! This was advertised on one of the many book emails I get and I was going to pass until I saw the heroine wasn’t white. Bought! Devoured it and enjoyed it a lot!” Goodreads review